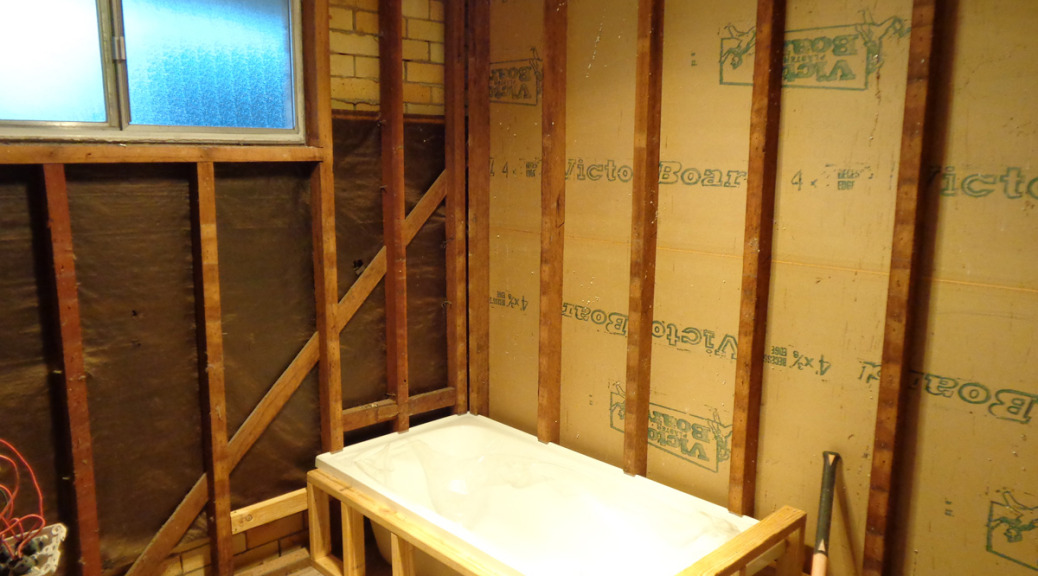 The bathroom in our house was pretty old and tatty when we moved in.

It was functional, but there wasn’t much that was nice about it.

When we threw our engagement party in 2011 we told people that we’d love a contribution to our bathroom renovation in lieu of any other gift.

I think we amassed around $5k from memory, but as we discovered, bathrooms cost a whole lot more than that!

Skip ahead to June 2013 and we were finally ready for our new bathroom.

Here are the ‘before’ photos… 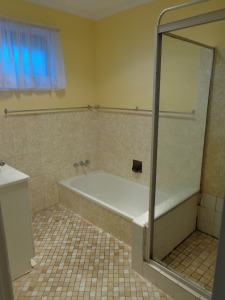 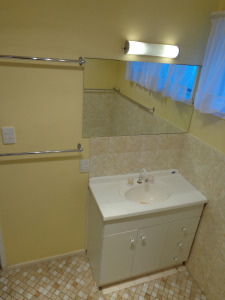 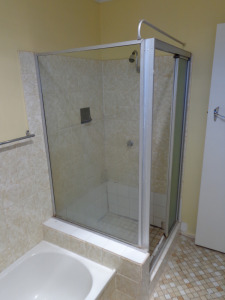 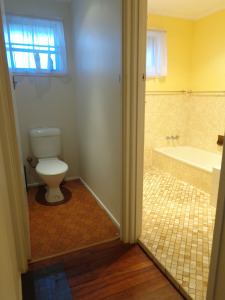 As you can see it wasn’t too bad, and it would have been perfectly adequate for many families, but we wanted something a little nicer.

We wanted to start again from scratch and create something that was far more modern and easier to take care of.

I don’t think the word ‘luxury’ was ever mentioned, but we did want something that looked great.

Our builder recommended replacing the standard door with a cavity slider, which gave us some much needed wall space to hang the towels.

The process of installing the slider didn’t go completely smoothly, in part due to the less-than-square nature of the walls, but it was still worth it.

We shopped around at a few different places, but ended up back where we started at Uptiles Strathpine.

Both the floor and wall tiles were 600 x 300.  The floor tiles were from Spain and are full ceramic.

The wall tiles are only ceramic coated I think.

We decided to spend a little extra and get the tiling done to the top of the wall, which definitely gives a better look in my opinion.

More or less all of the fixtures and fittings were from Reece.

There’s not too much to say about them, but we’re happy with everything we chose.

Work started on the 20th of June, and by the end of the day we had a fully gutted bathroom and a new bath in place… 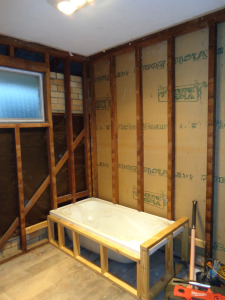 A few days later the walls had been re-sheeted, the waterproofing completed and the floor tiles laid.

It was great to see the tiles down, and we were (and still are) super happy with the tile choice.

The wall tiles went up next.  We had a niche installed in the shower, and on the recommendation of the tiler we used the floor tiles rather than the wall tiles in the niche.

It was a great idea, and really breaks up the big light coloured wall. 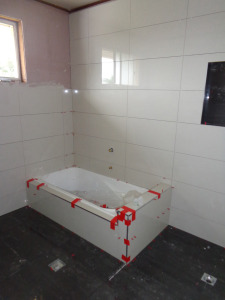 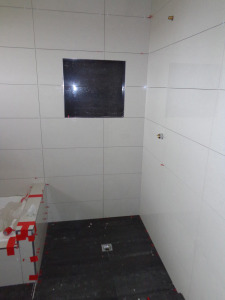 Here are the before and after photos.  We replaced the toilet itself as well as tiling the floor.

We also replaced the old window in the toilet, however it was done after the photo was taken. 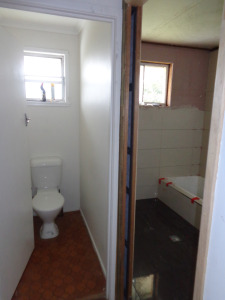 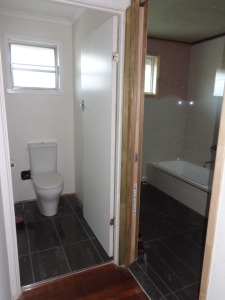 In the second photo above you can see the new cavity slider in place.

The above two photos also show that the toilet door was moved from one side to the other.

This was due the cavity slider, which necessitated moving the toilet light switch from the bathroom side to the other side, and therefore the door to ensure that the switch was still accessible.

By this stage you could really get a feel for how the new bathroom was going to look.

Here are the shower accessories in place, prior to the screen going in. 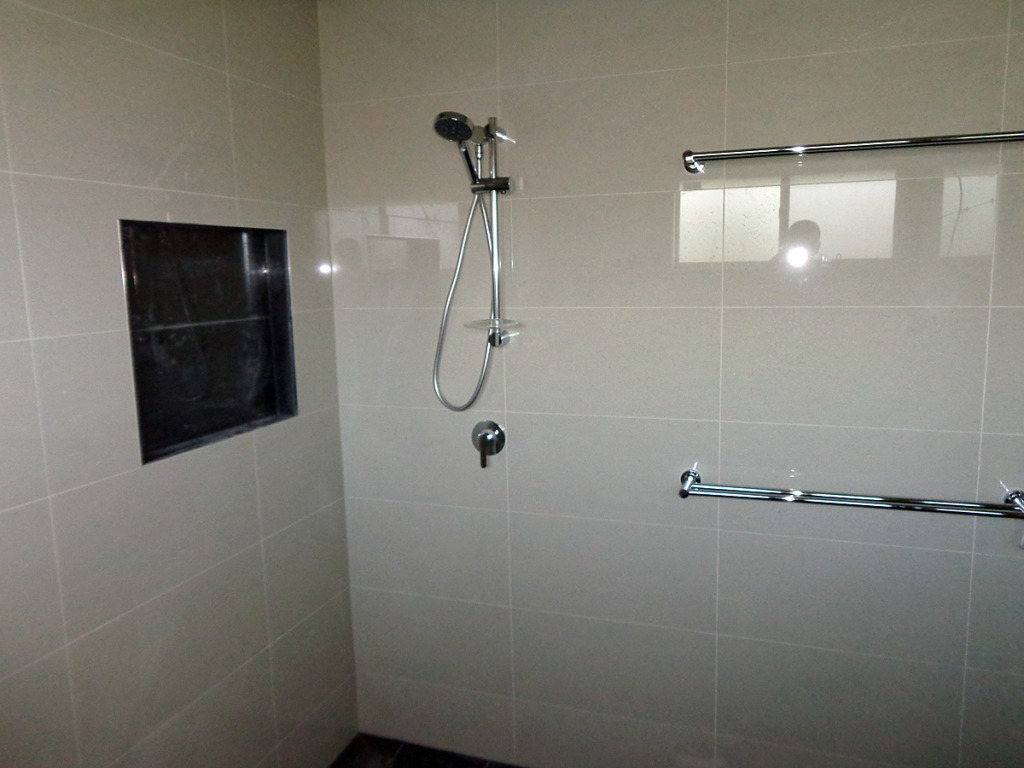 And the new bath… 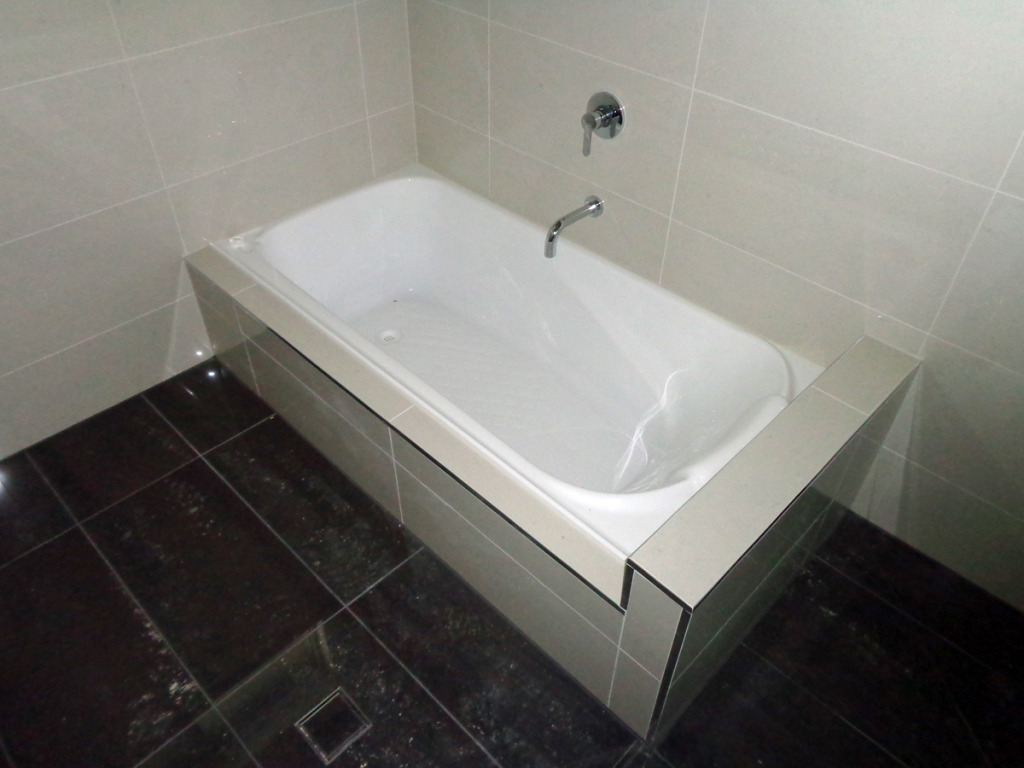 Here’s the new window in place, and the wall tiling almost complete… 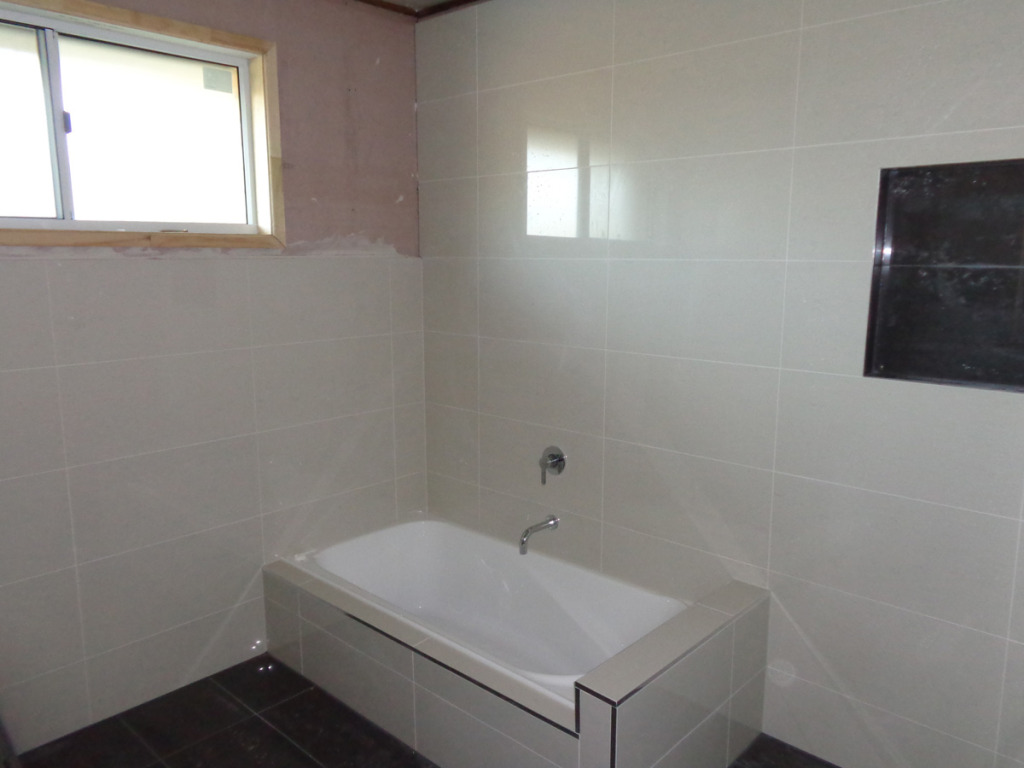 The finished wall!  Minus the shower screen, which by this stage had been measured and was in the process of being made. 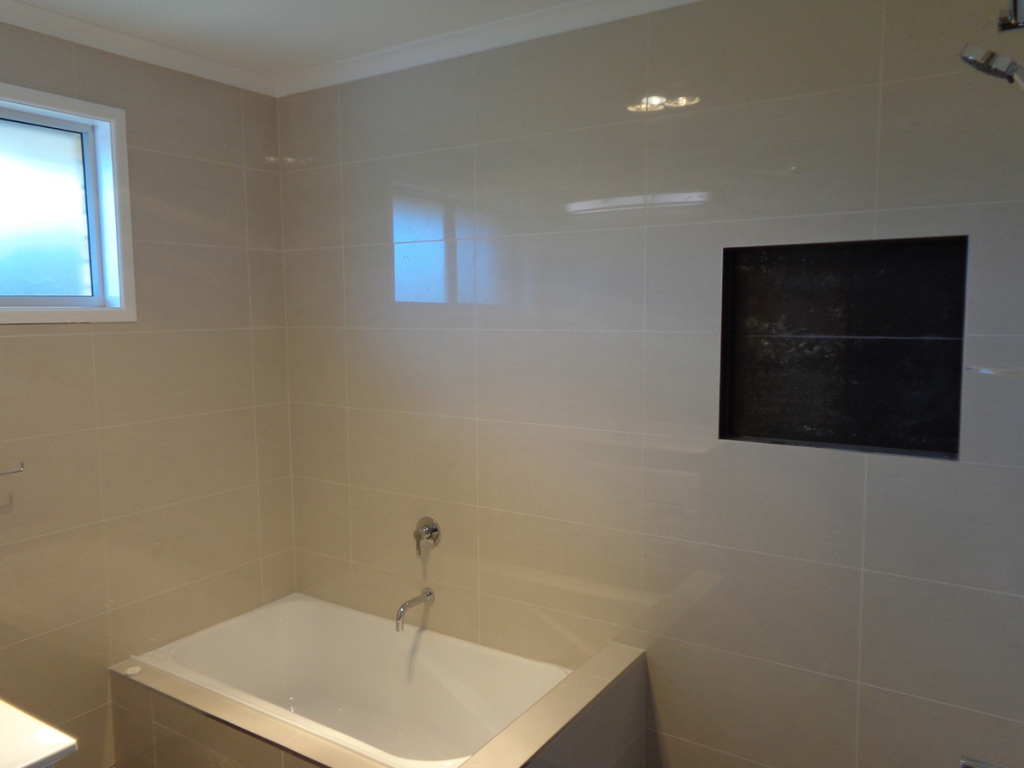 And here’s the new vanity unit in place.  The mirror had not been installed yet, however it was to cover virtually the entire wall, being the width of the vanity and filling the height from just above the vanity to just below the light. 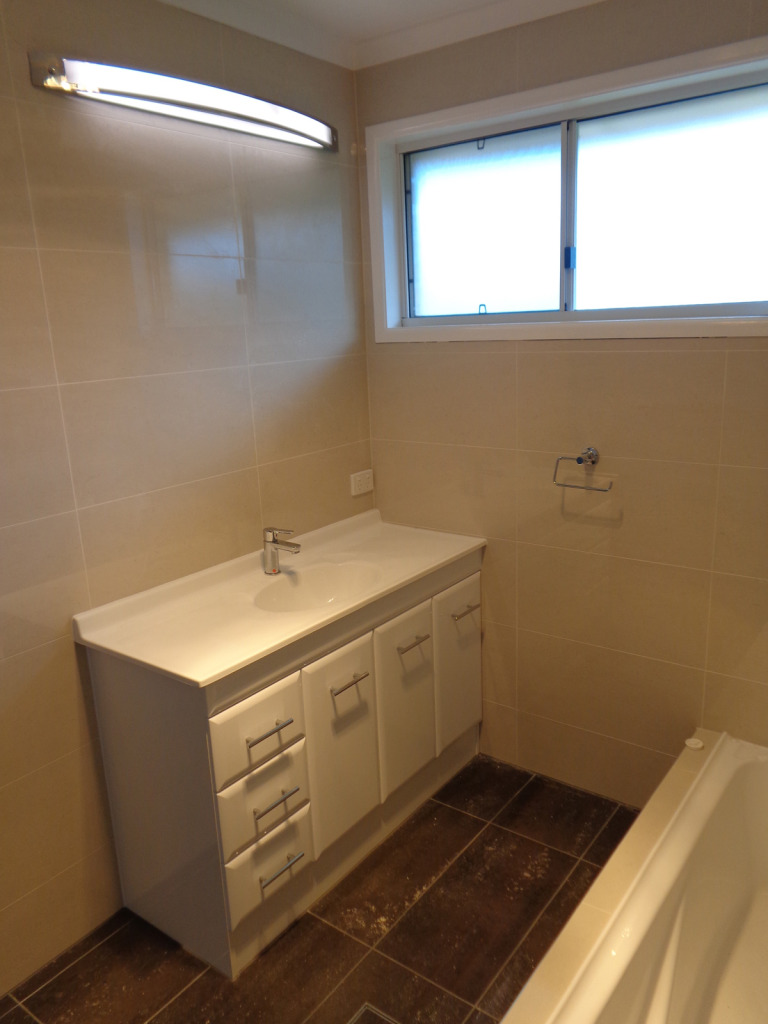 It may have been nice to get a double vanity, but we just didn’t have sufficient room along the wall.

This is where my photos run out.  I’ll take some more soon with the shower screen and mirror in place.

The only major drama we’ve had since the install (which was just over a year ago) is the build up of mould in the shower.

It seems to have gotten under the silicon, which means there is no way to clean it off.

We’ll need to get someone out to remove the silicon (and maybe the grout?) and then clean it all up before re-doing the silicon.

That combined with more regular cleaning should do the job.

Overall we’re wrapped with the new bathroom, and at a final cost of around $18k it was money well spent.