Well it’s been ages since we last posted, but there’s still been plenty happening!

The bathroom is still at the top of our list for major work, but at this stage we’ve been sticking to the outside of the home.

We’ve put new gardens around the outside of the backyard, and planted plenty of new plants.  It has a bit of a tropical feel, with palm trees, yuccas and other similar plants.

After the new gardens filled with weeds over a few months, we decided that they needed some major work before our engagement party.

To start with I did all of the garden edges using pavers secured in place with concrete.  We then filled the gardens with five cubic metres of bark, which came up really good in my opinion.

To complete the backyard we had a timber fence built around the whole thing, with does well to improve the aesthetics as well as security.  There were a few dramas with the fence builders, but more about that later.

Not much has happened inside, besides painting my office orange!  Otherwise everything is still pretty much standard.  We have big plans for the kitchen, but at this stage that’s a long way off.

I will try to post some pictures and more information about the backyard soon. 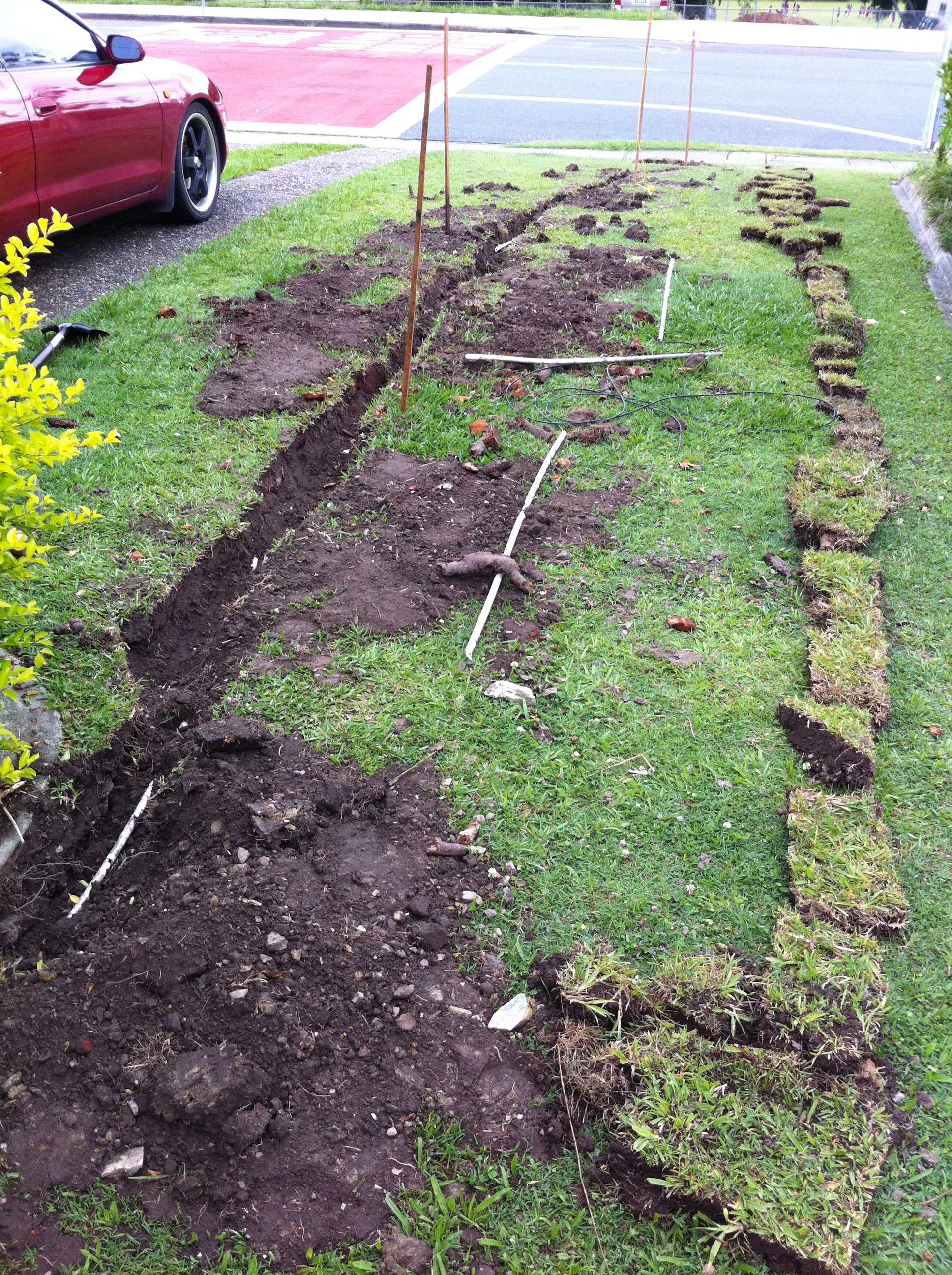 After being told by Telstra that the lead-in cable to our house was damaged, I was told to contact a local contractor who could come and dig a new ditch from our home to the footpath.

Rather than pay a contractor up to $300 per hour (so I’ve been told) to dig the trench, I decided to tackle the project myself, and I’m very pleased to say that the project was a success!

Here’s how it happened:

Google wasn’t as helpfully as I thought it would be, as I guess not many people decide to dig their own lead-in ditch.  Thankfully I did find some resources through the Telstra website and the Whirlpool forums, which you can check out here:

According to the info I found, the trench had to be 300mm deep and with a reasonable amount of clearance from any water carrying pipes.

Step 2 – Dial Before You Dig

This was probably the easiest part of the project.  I simply entered my details on the Dial Before You Dig website and within a day or two I received emailed maps from the local council, Unity Water, Telstra and Energex.

The maps gave me the all clear, and the only hiccup was when I received a call from Telstra telling me there was some rather expensive fibre optic cable buried in the area.  She assured me it should only be outside of the property border, so hopefully everything would be okay.

I decided to follow the existing lead-in cable from the house to the footpath where the Telstra pit was located.  This was fairly straightforward, as I simply followed the existing cable down the side of the house and started digging.

Because I already knew the cable was damaged, it wasn’t such a big deal if I further damaged the cable during the digging process.  And yes, I did slice through the conduit and cable a few times!

I enlisted the help of a mate (thanks David!) and we used a flat shovel to dig out the grass first rather than digging straight in with the mattock.  We managed to save most of the grass, and I’m pleased to report that at the time of writing the grass has survived and is back in its place. 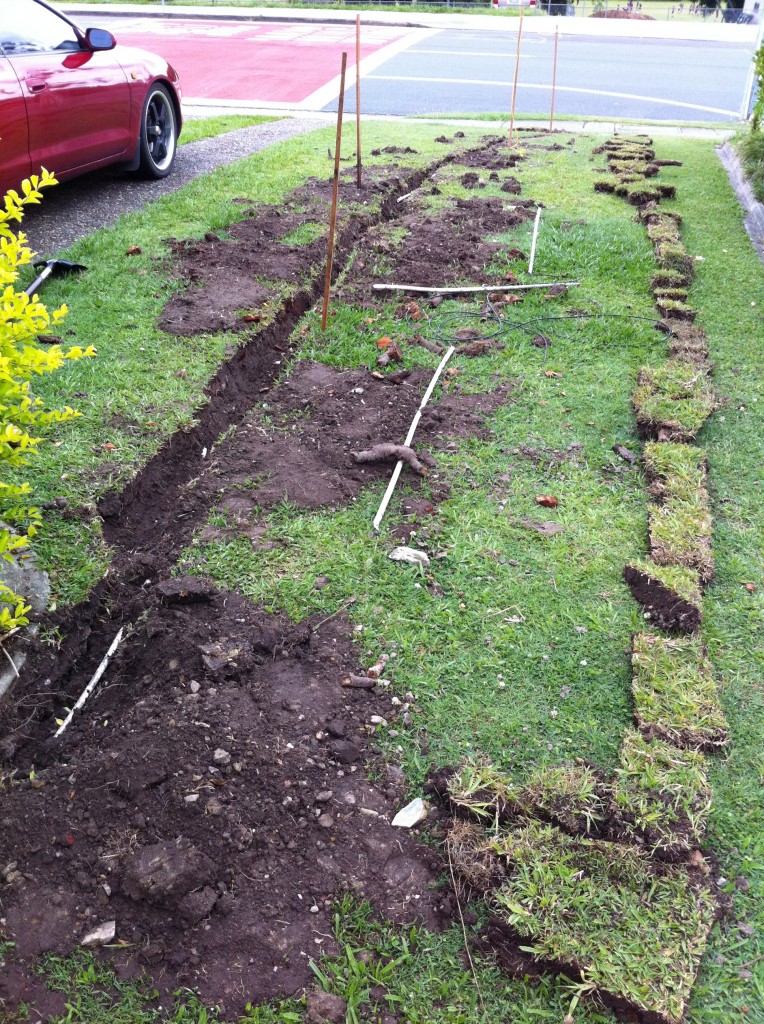 The picture above shows the trench after the initial digging, before going down to 300mm.  You can see the broken conduit laying around, as well as the grass we carefully removed.

Whilst digging down to the required 300mm depth I hit the storm water pipe.  Thankfully these old pipes are made from super thick concrete or some sort of ceramic, so a few hits from my mattock barely chipped them.

It did raise a problem though – according to the specifications I read, there had to be around 100mm clearance from any storm water pipes.

There was no way I was moving the trench or digging it any deeper to go under the storm water pipe, so I simply brushed some dirt over the pipes to keep them out of site.  Easy!

I don’t know why, but after completing the ditch and calling Telstra to book in a time for the new cabling to be installed, I decided to do some further research on the trench specifications.

I found a Telstra document more recent than the ones I had originally used (although now I’ve lost the link, sorry!) and much to my horror it said the trench must be at least 350mm deep, with a recommended depth of 400mm.

Needless to say, I decided to pretend never reading that document, and left my trench at 300mm.

Step 4 – Installing the Conduit and Cable

The Telstra guy arrived late on a Friday afternoon, thinking he was just hooking up a new connection.  Then I showed him the trench…  We didn’t know it at the time, but it was going to be a long afternoon.

Once the Telstra guy had finished his work, we tested the line and it worked fine.  I was pretty pleased with that, and also very pleased that there was no scrutiny of my potentially too shallow trench.

Given that the existing trench was only 100 – 150mm deep, the new trench is twice as deep and should provide plenty of protection for the cable.

Thankfully we thought ahead when digging the trench, and laid all of the grass in order as we removed it.  This meant the grass went back into place relatively easily, and has left our front lawn as undisturbed as possible.

This picture was taken just after the grass was re-laid.  You can still clearly see where the ditch was, but this should clear up within a month or two.

Digging the trench yourself may seem daunting at first, but once you get into the job it’s pretty easy.  Expect to have blistered hands and sore arms afterwards, but if you ask me it’s better than paying someone else $300 an hour to dig up your front yard.

Last week I organised for Telstra to come out and hook up the phone line.  Being an existing home and noting that there were a couple of phone plugs around the place, I figures connecting up the line would be an easy job.

Unfortunately, I couldn’t have been more wrong…

The technician from Telstra advised that the line was fine out in “the pit” (the hole in your footpath covered by the concrete Telstra box) but unfortunately there was no signal inside the house.

She tried a few things, but sadly the only way to fix the problem is to dig a new trench from our house to the pit and have Telstra lay a new cable in there.

Telstra recommend having a contractor dig the trench, but after doing some research online it seems that plenty of people just like me have dug their own ditch without any problems.  Telstra even have the instructions and specifications available on their website.

So that is my next exciting job, digging a ditch…

So this is our new home.  It’s a two story brick home built in the seventies which is quite typical for its age and the area.

There are three bedrooms upstairs, and downstairs has been built in to accommodate a study and an additional guest room.  The guest room was to be our pool room, but turns out it’s a little too small for that purpose.  It will now be my office until the proper office has been renovated.

The kitchen and bathroom are certainly liveable, but they are dated and are definitely towards the top of our list for replacement.  The bathroom will be first to go, as it’s the one most in need of updating.

The carpets in the lounge, dining room and hallway have been ripped up at some stage, with the hardwood floor underneath having subsequently been polished.  Unfortunately the previous owners have done a very poor job of looking after it, and it will need polishing again very soon.

Lighting throughout the home has been updated through the use of downlights.  A lot of downlights!  I don’t think it will be great for our power consumptions, but I must admit they do look good at night.

The walls upstairs look like they’ve been painted sometime within the last few years, with some bright feature walls in the lounge room.  The paint isn’t too bad at first glance, but upon closer inspection they haven’t done a particularly good job, so new paint throughout is definitely on the cards.

Outside, the home sits on a nice flat block.  The previous owners haven’t done a bad job with the landscaping, but it is pretty basic.  Our first job outside is to start planting trees in the backyard that will start to give us some good privacy over the coming years.  We intend to build a big deck on the back eventually, so we need the trees to grow fairly high.

Enough typing, I’ll let the real estate agent’s photos do the rest of the talking.  These were obviously taken while the previous owners still lived here. 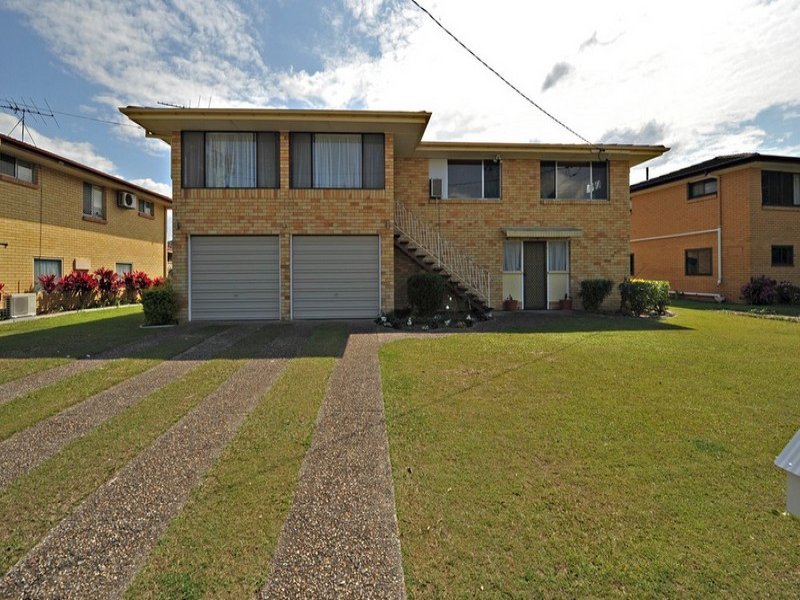 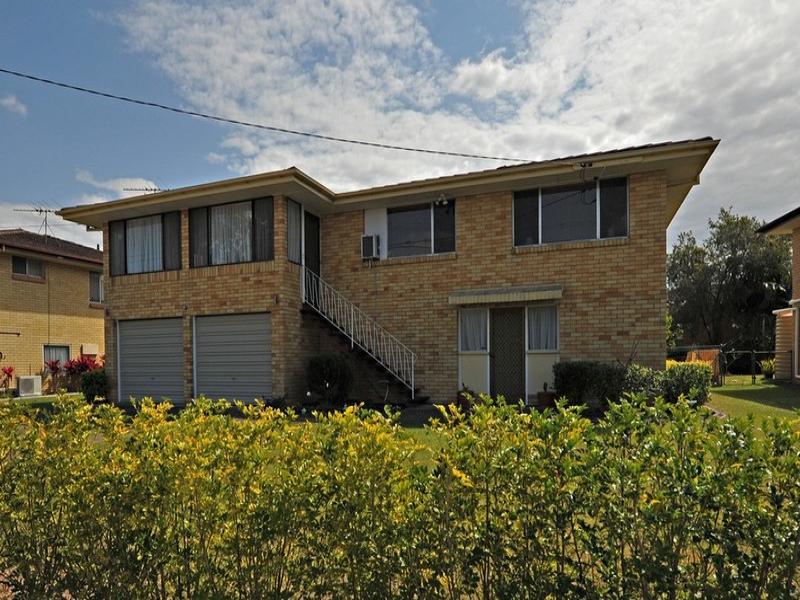 The floors look in better condition here than they actually are.  This pic also shows the generous use of downlights as well as the handy sunroom out the front. 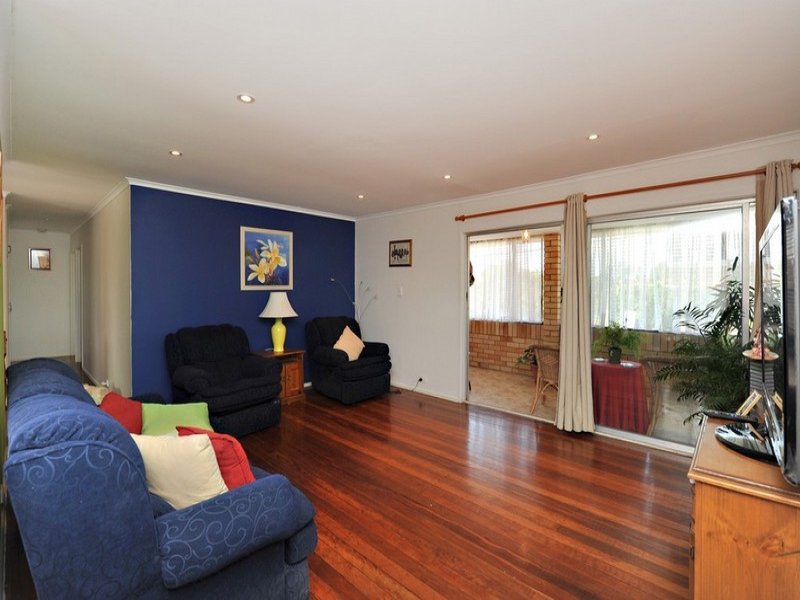 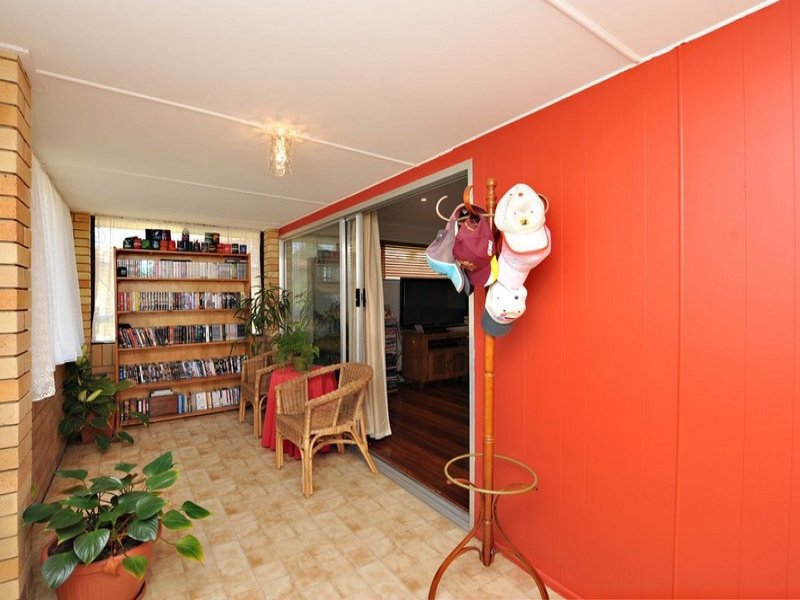 You can see the poor condition of the timber floors here in the dining room.  Why couldn’t they have spent $5 and ten minutes of their time to stick some felt pads on the table and chairs?  We’ve now done that, but the damage has already been done. 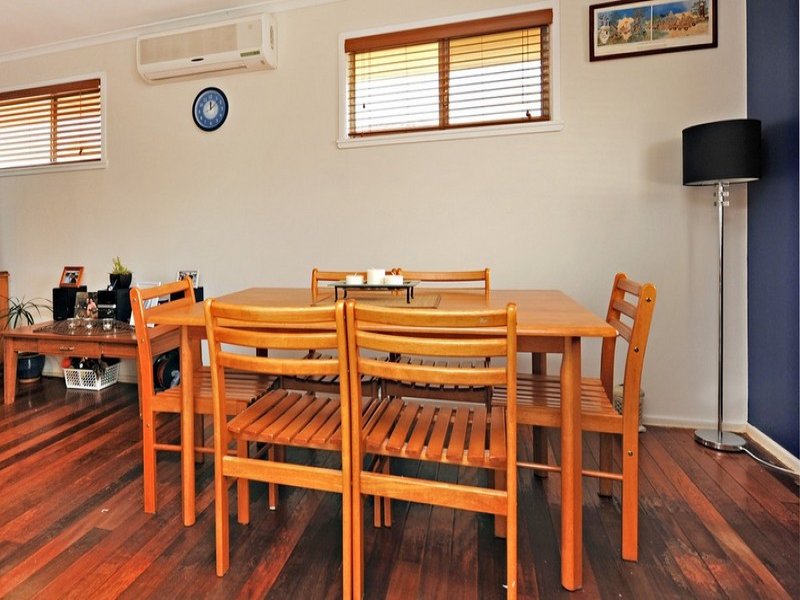 The kitchen looks neat enough, but the lack of benchspace is the worry here.  Plus it does look a little dated. 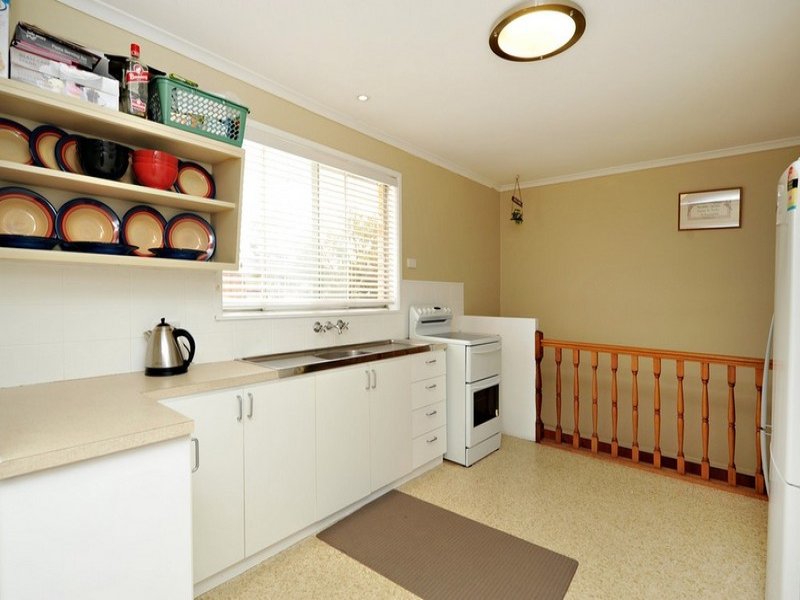 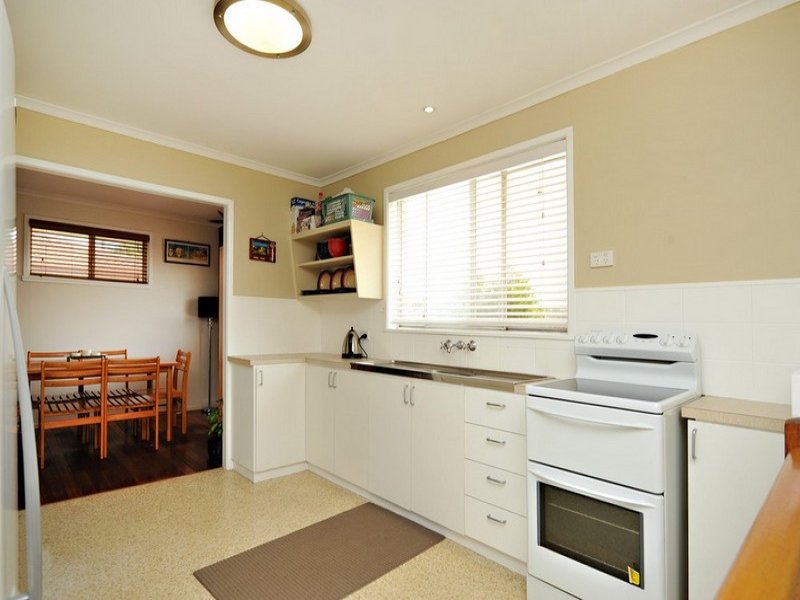 The bathroom is definitely the daggiest looking room in the house.  Replacing the lemon yellow walls with bright white would be a big improvement, but a total renovation is on the cards for the bathroom. 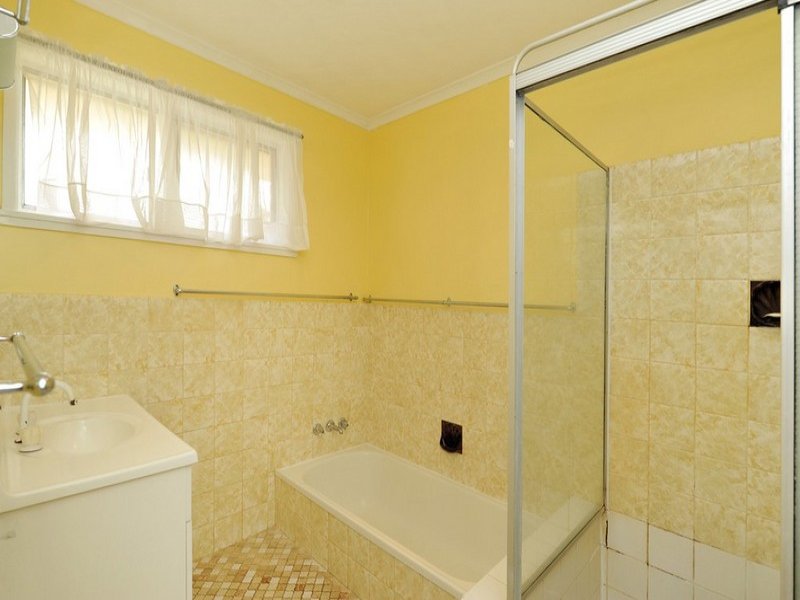 The master bedroom.  There’s loads of wardrobe space, which is great news for Jessica.  They’ve installed an air conditioner in the wall by removing one of the windows, but unfortunately they’ve done a rushed job which isn’t great. 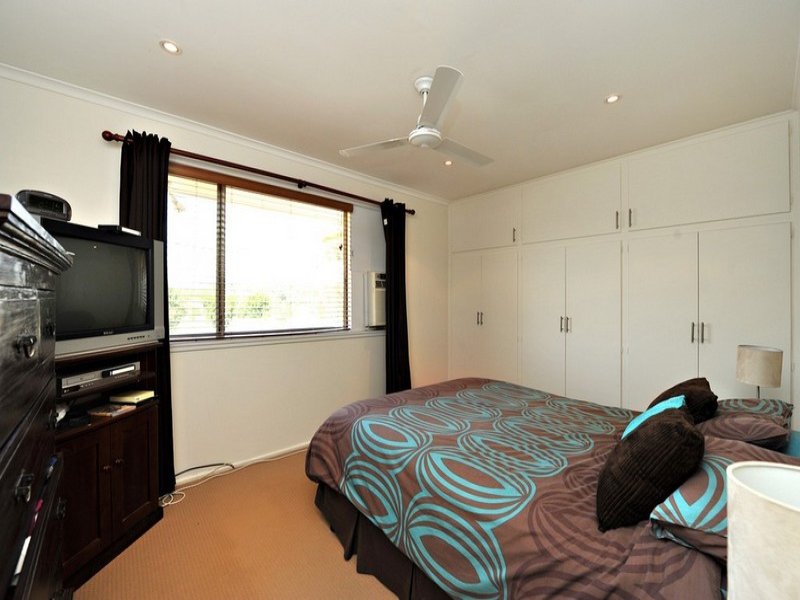 This bedroom is quite neat. 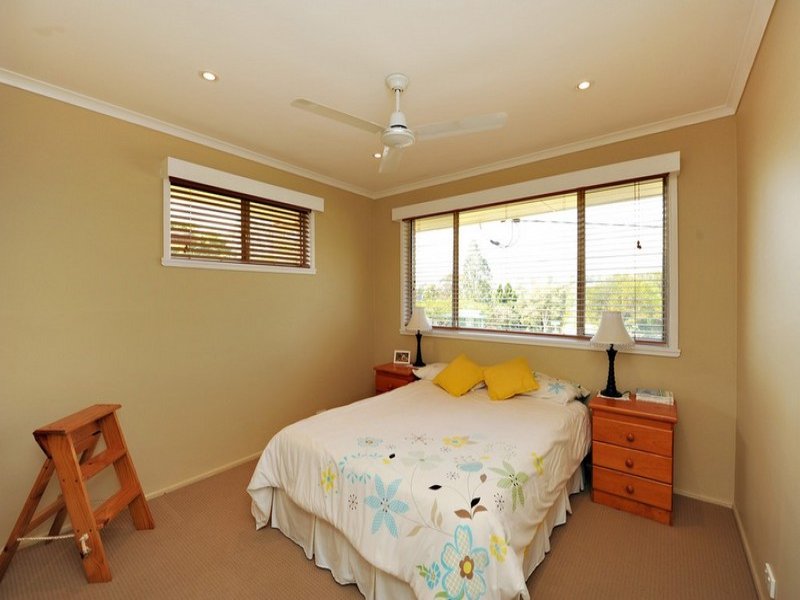 And the “green room” looks good too. 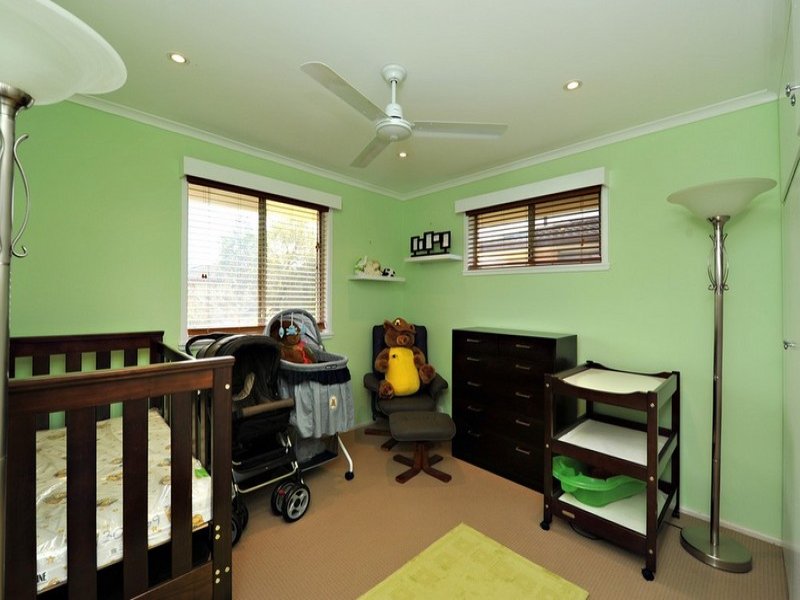 We thought this could be the pool room, but after doing some measurements it’s going to be a little too tight for comfort.  It’s a shame too, because we had a free pool table ready to go! 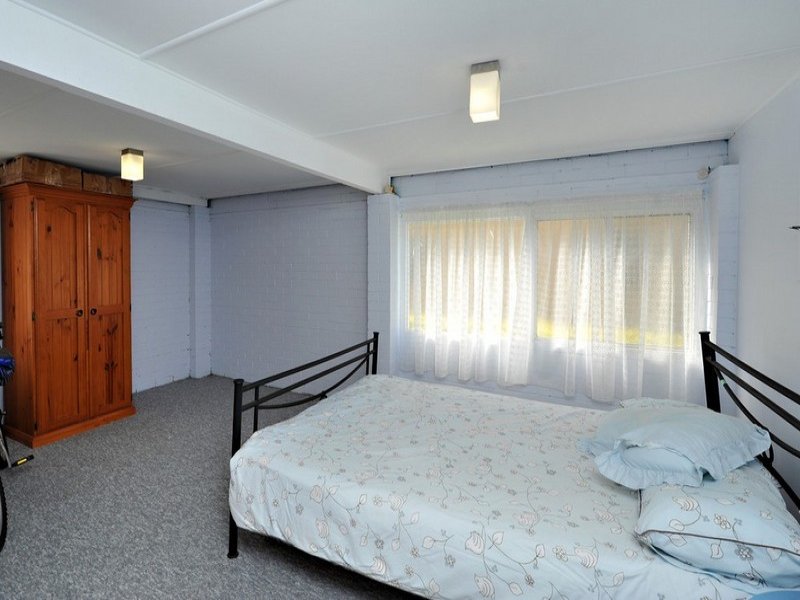 This will eventually be my office, but as you can see it needs a LOT of work before a business of my status can move in there! 😉 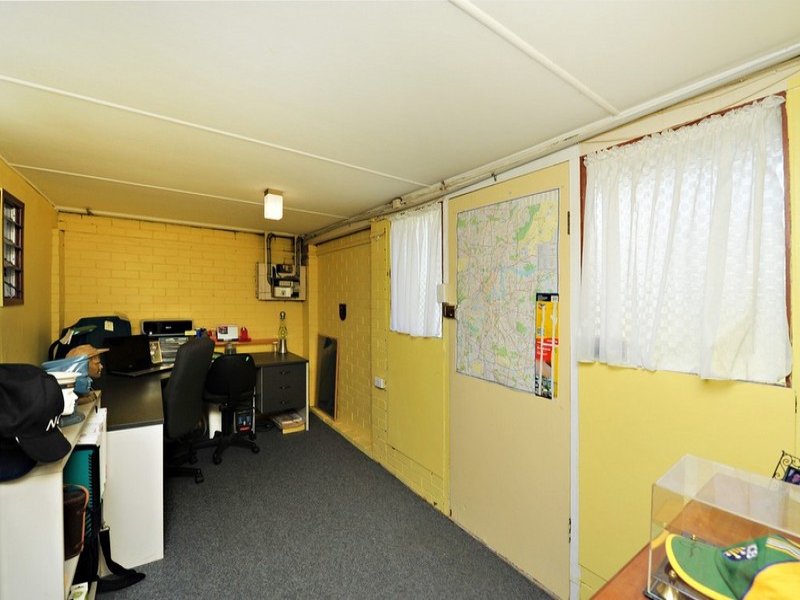 Our little entertaining area.  It’s not huge, but it should be great for the odd BBQ and beers.  You can’t really see from the photos, but the lattice work all ’round is starting to sag at the bottom.  Another handyman job for me over the coming weeks. 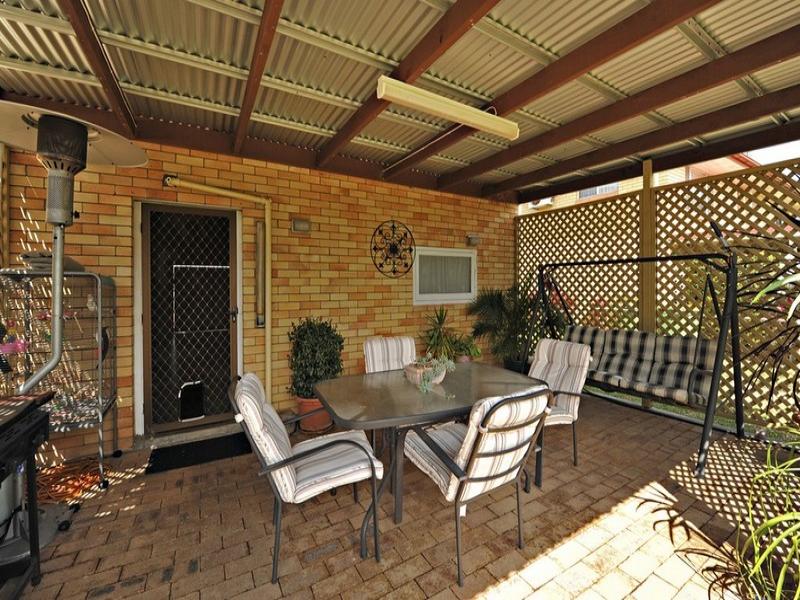 And the nice flat backyard, complete with a 9,000 litre water tank.  I doubt we’ll ever be short of water with that sucker out there.  Privacy is almost non-existent with our two side neighbours, so we’ll be planting plenty of screening plants and trees over the coming weeks and months. 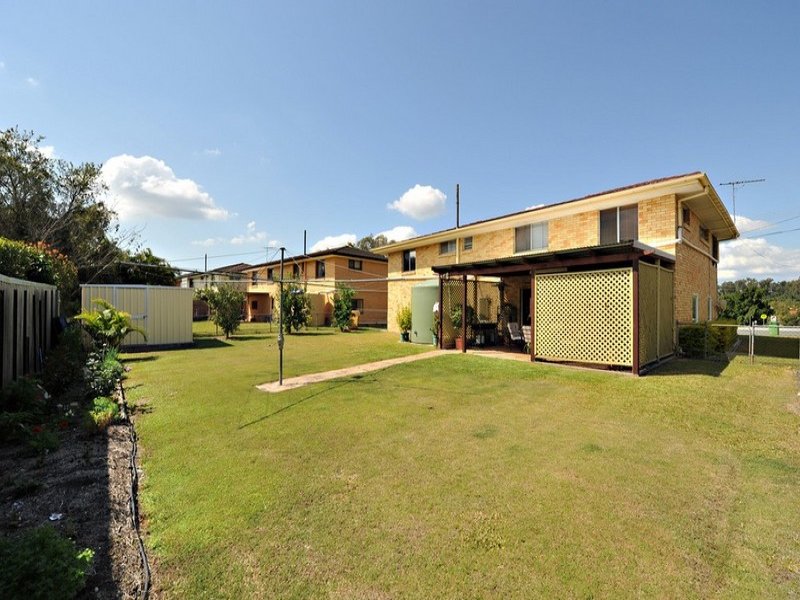