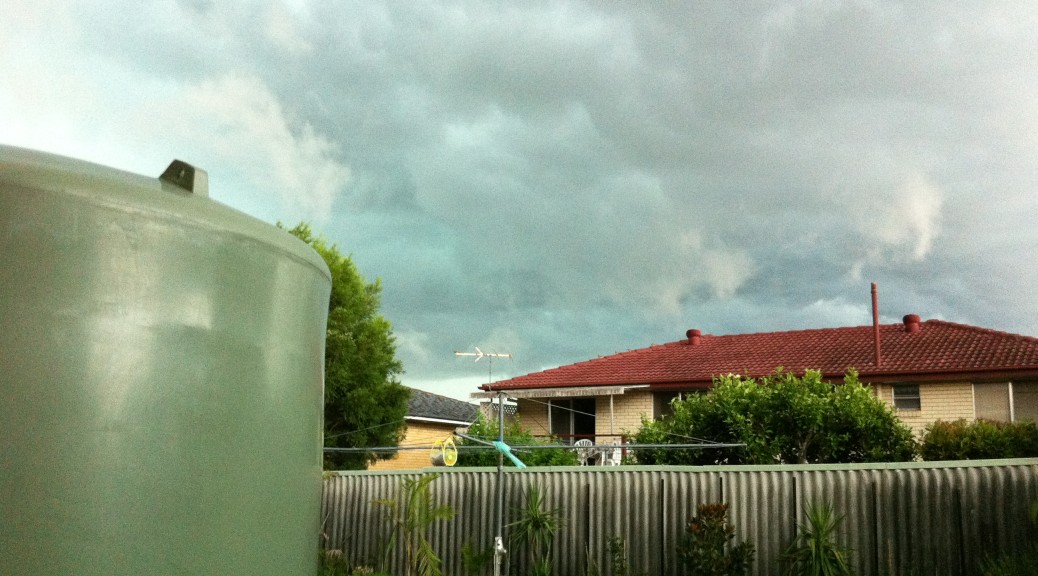 This post is really just an image dump.  All of these pics are from my old iPhone and span the period from 2010 to 2011.

The first image was actually meant to be of a bogan across the road who had been pulled over by the police, but it also does a good job of showing the state of our front hedge at the time.

This is how the hedge looked as of November 2010, which was just one month after we moved in. 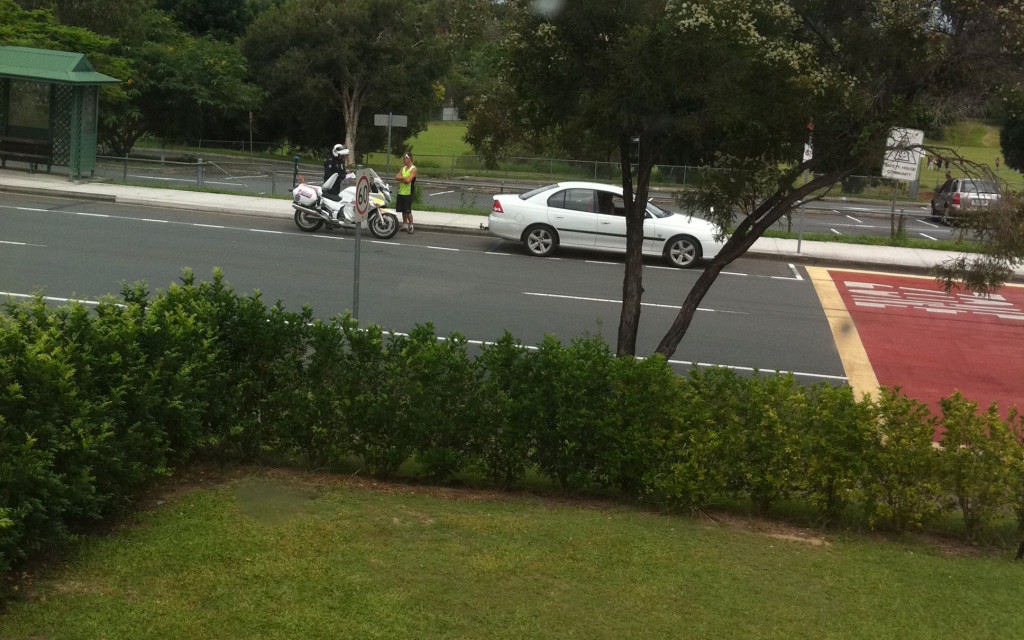 The hedge is much shorter than what it is now, but also a lot healthier looking – especially at the letterbox end which is now very ordinary.

The next couple of pics show our back yard in the early days.

This first photo was meant to be of the storm clouds I assume, but it also shows the back garden shortly after we planted it out. 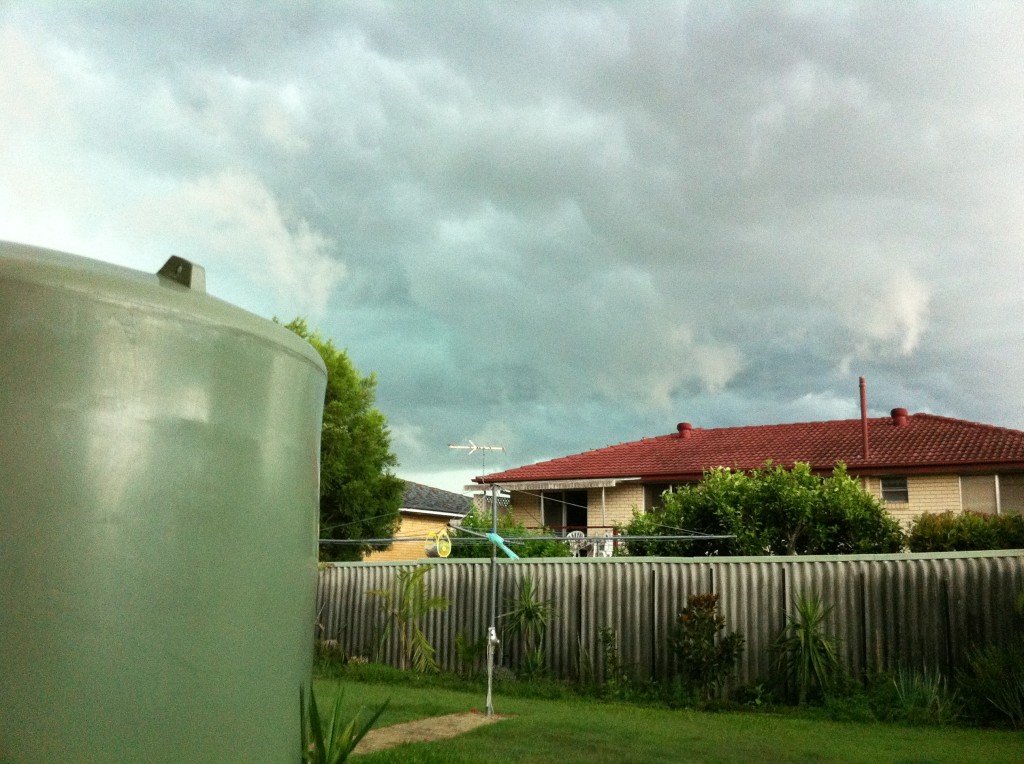 At this stage (February 2011) none of the plants were what Jessica and I called ‘brechers’, meaning that they had breached the fence line.

Our goal for all of these plants was to provide some privacy screening, so as each plant finally breached the fence line over the years it was very exciting!

Now virtually all of the plants pictured above have well and truly breached the fence, although they still don’t provide the level of privacy that we really wanted.

This next shot shows the citrus trees on the right hand side of the yard.  It was taken on the 31st of March 2011, which coincidentally happened to be exactly one year before our wedding day! 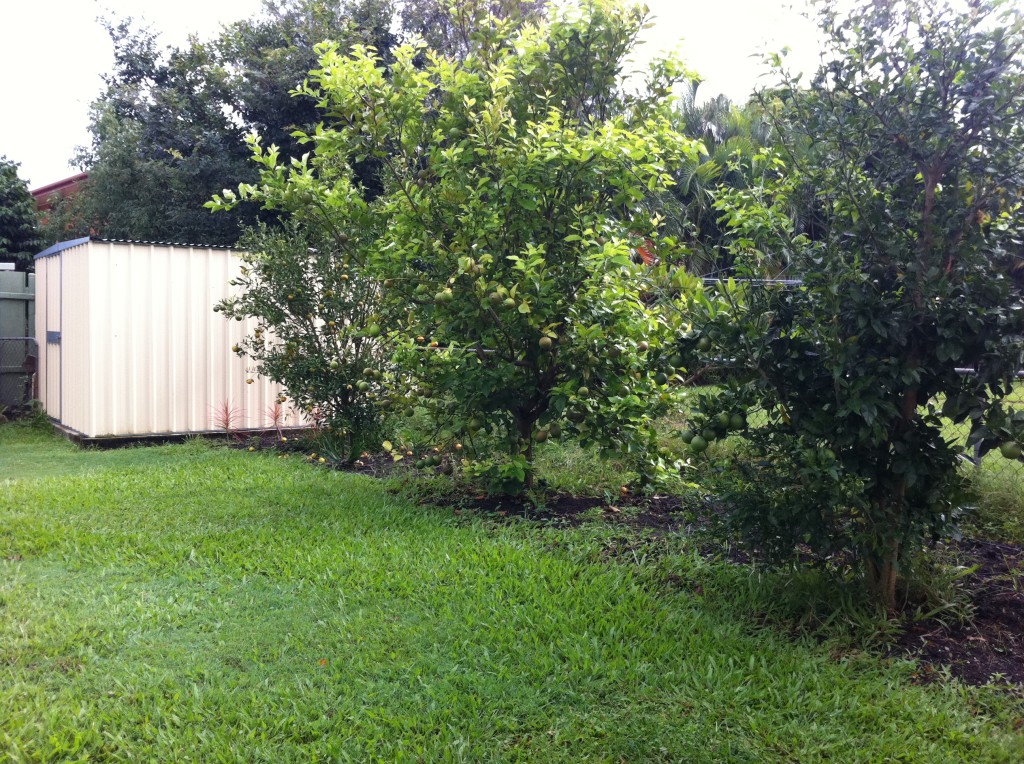 It appears that this picture was taken after we’d dug up all the grass to turn this area into a big garden, but before we’d done the job properly with garden edging and bark.

Therefore, as you can see, the grass has grown back and it looks quite terrible!

This area looks much better now since it has proper edging and a good covering of bark.

The citrus trees themselves have been a bit up and down, which is mainly due to a lack of attention by Jessica and I.

We really need to start caring from them properly.  One day…!

Next up we have some of Jessica’s excellent work down the side of the water tank. 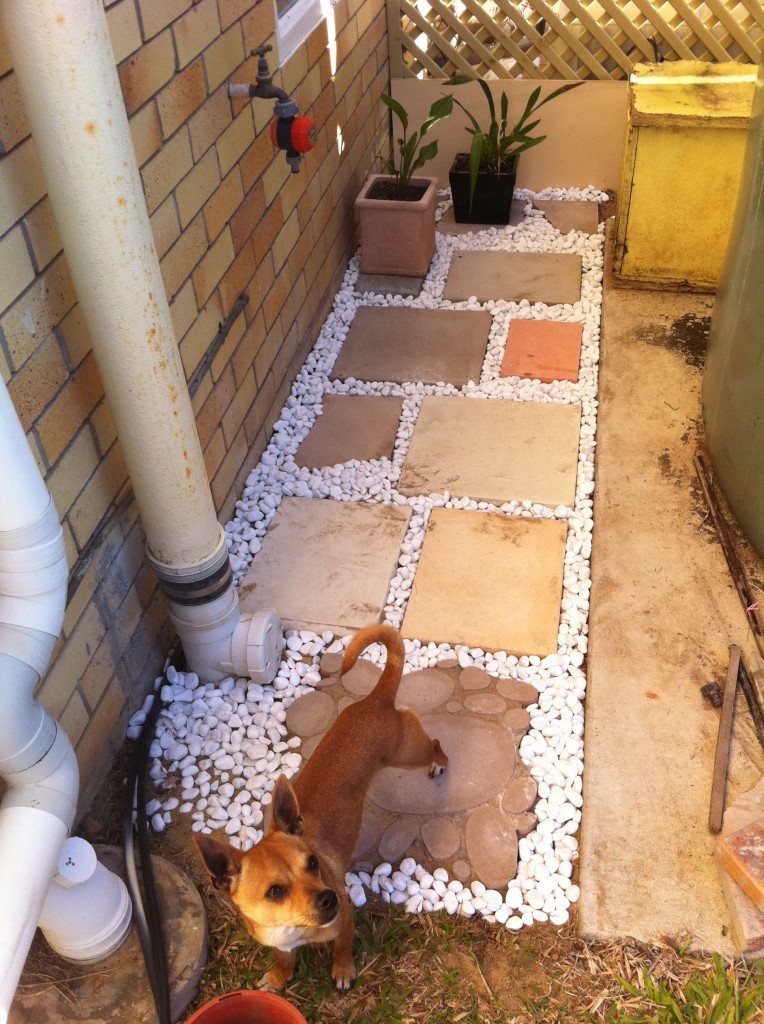 Previously this was a pretty feral overgrown area, but some white pebbles and mix-n-match pavers totally transformed it.

The image was taken in June 2011 when the work was initially done, however over the following years we regrettably let it deteriorate again.

Thankfully Peter (Jessica’s dad) came to the rescue and recently restored it back to it’s former glory, along with building a new box for the tank pump which looks much better.

To end we have a couple of pics from a hail storm in October 2011.

This must have been shortly after the back yard was fenced, as the timber sections of the fence are looking very nice and new. 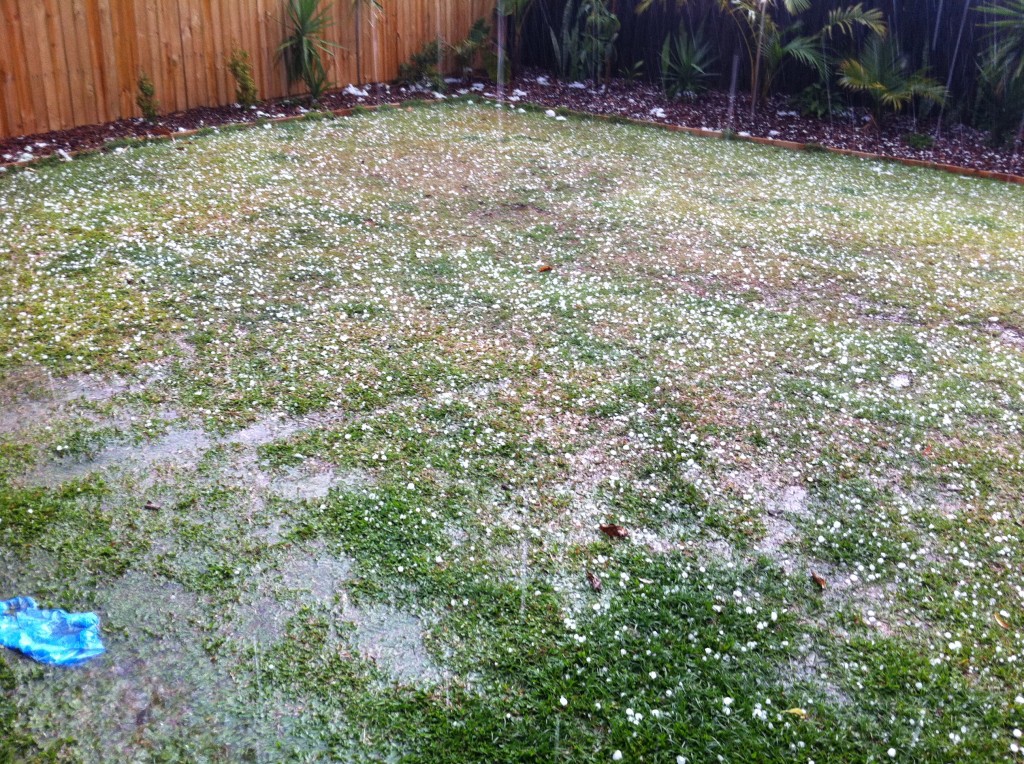 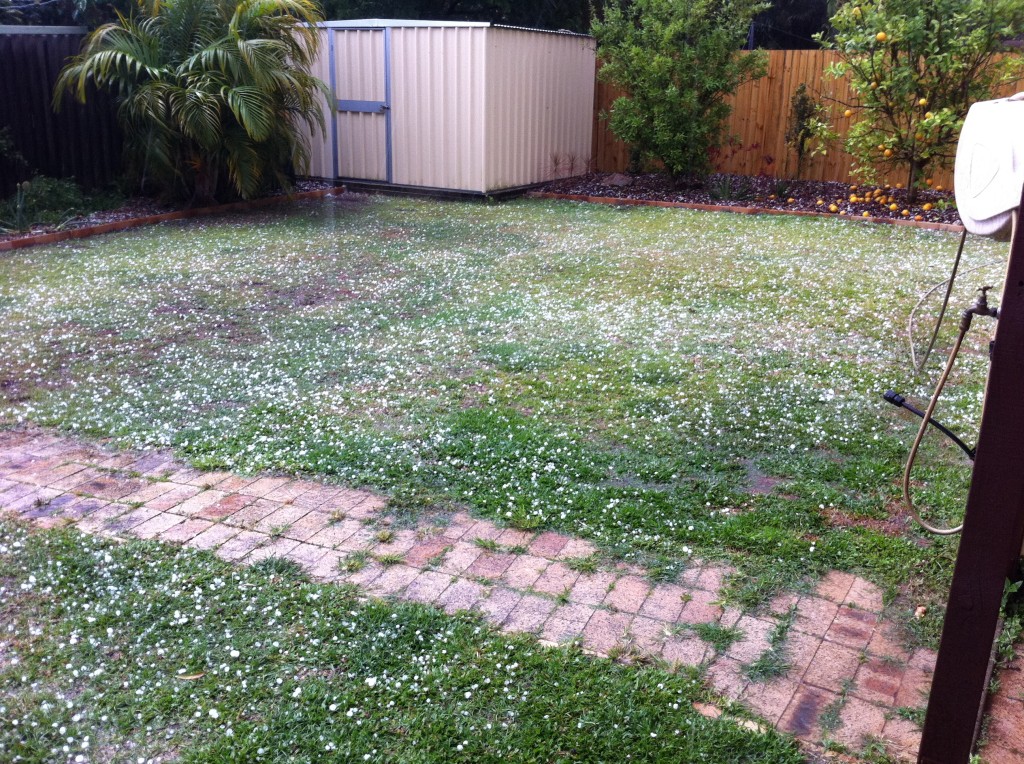 In this last one you can see the old veggie patch next to the golden cane palm.  This is long-gone now…

And that’s it.  There are plenty more old pics that I’ll need to upload at some point, but these are just the ones from my iPhone.

It’s amazing how different everything looks now (March 2014) compared to these old photos! 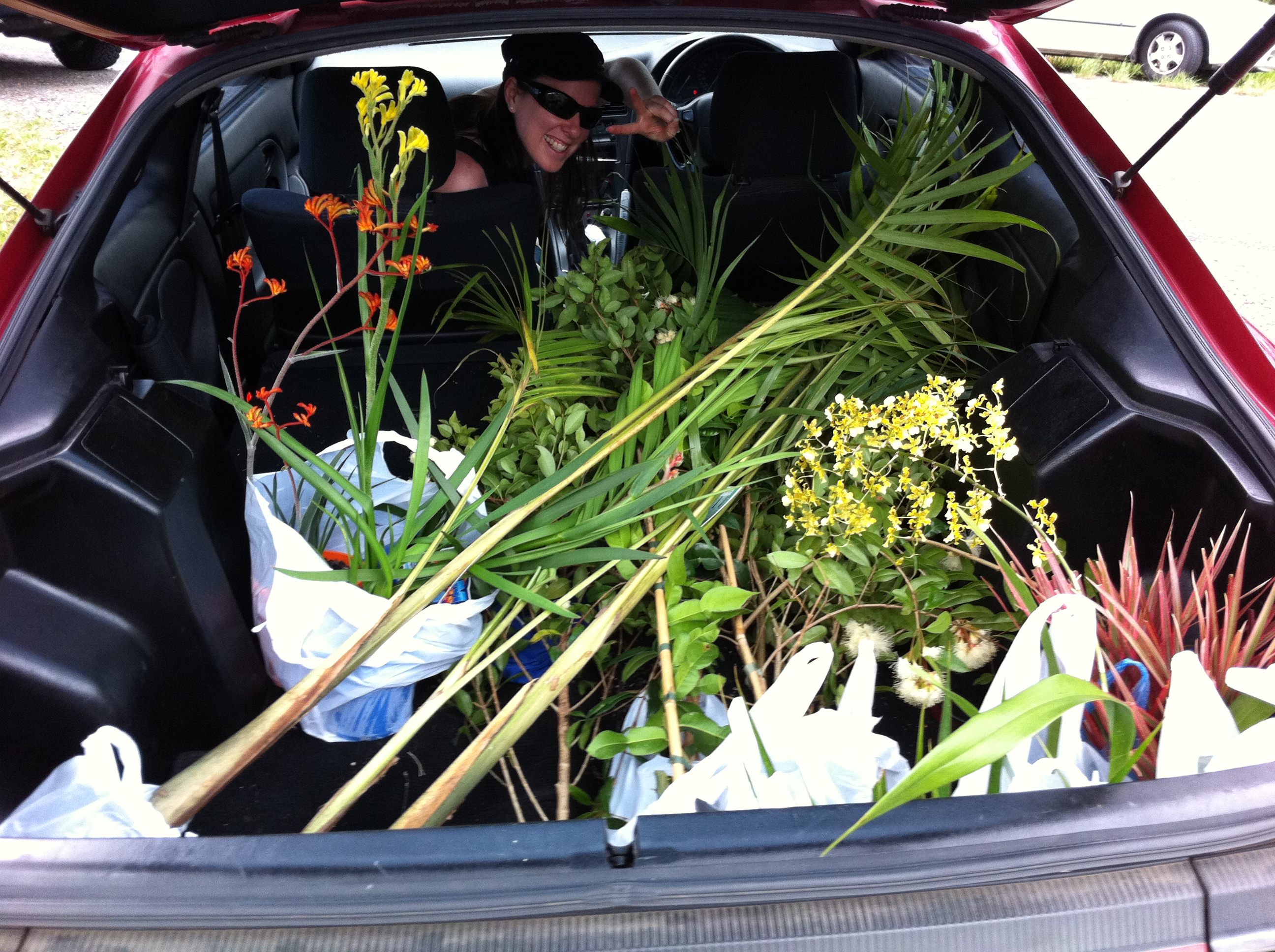 Despite the fact that we bought a bunch of plants weeks ago, that were still sitting in their pots on the backyard, we decided to visit the Caboolture markets last weekend and get some more plants.

Here’s what we got… 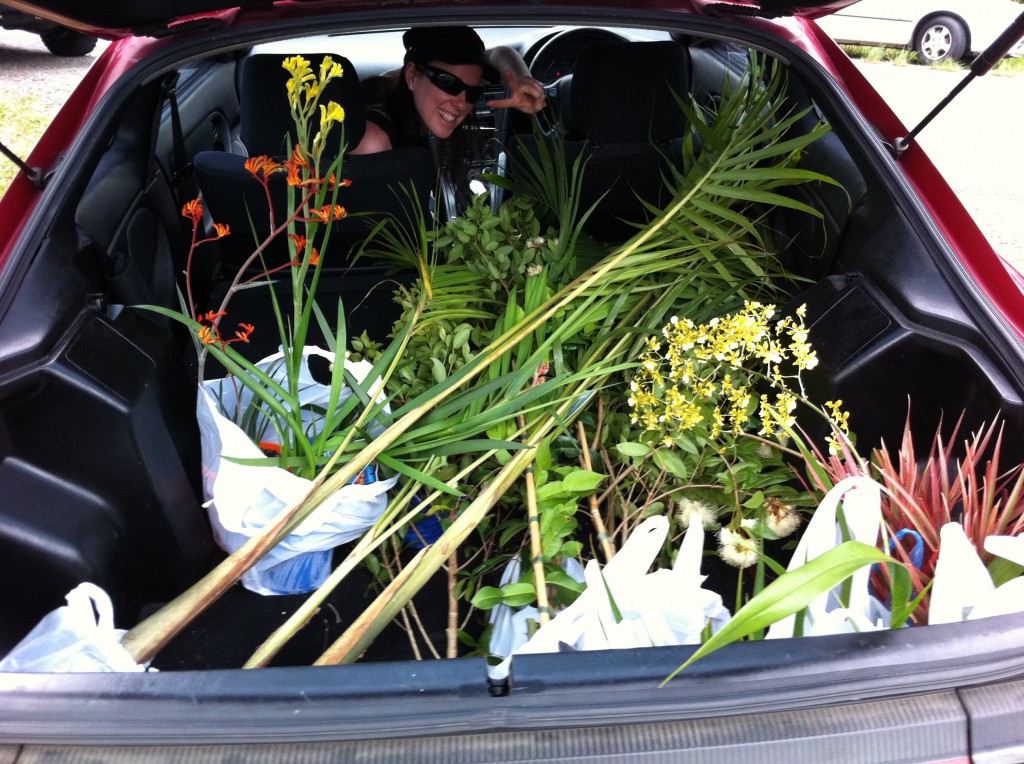 Thankfully they did all fit, although the palm trees went from one corner of the boot, all the way down past the side of my seat with a couple of leaves swaying around in the footwell.

We also managed to plant most of them in our new garden, but more about that in a later post.